Rather than my own personal favourite XI, this feature tries to work out who would make an all-time Melchester Rovers dream team. This was not quite as difficult to select as the worst XI, but one or two men were difficult to leave out. Add your own selections in the comments section or discuss on the forum.

GK - Tubby Morton
Tubby was signed from local amateur team Tranbridge United in the 1954-55 season, just a few months after Roy Race joined. In fact it was Morton's performance against the young Race against the Rovers A side that convinced the Rovers scouts of his potential. Tubby made his first-team debut at the start of the 1958-59 season after Len Dolland was hurt in a car crash. The larger then life goalie would remain the undisputed number 1 until he broke his leg on the opening day of the 1973-74 season. Like all goalies Tubby had his mad moments, but overall he goes down as the most consistent of all the men to play between the sticks for the Rovers. The most honoured, Tubby is also the only Rovers goalkeeper to represent England at a World Cup.

RB - Noel Baxter
Noel was the joker of the Rovers squad, always playing tricks and having a laugh. But on the field he was one of the original attacking full-backs, a real wing-back who would not be out of place in today's tactics. Strong on the overlap, Baxter created chance after chance for the Rovers forwards throughout the 1970s. On the saddest day in Rovers history, Noel Baxter would lose his life in the Basran Disaster, but his legacy would live on forever.

Alternative - Steve Wootten
Like Baxter, Steve "Nobby" Wootten was a real attacking right-back. Naturally aggressive he was perhaps a stronger defender than Baxter, but his overall achievements at the club don't match up with his predecessor. Nobby made his debut in the first match of the 1986-87 season and would remain first pick in defence until the 2000-01 season. He gained England under-21 honours in 1989. Nobby became club captain on Roy Race's return in 1997.

CB - Karl Bruckner
One of the few Melchester Rovers players who would walk into a World XI. Signed for £3million from Dynamo Bresden, the Bresden Bull had absolutely everything needed to be the best defender and more.Tough and strong in the tackle, yet also gifted with the ball at his feet. Bruckner was exceptional in breaking up attacks and building them from the back. His surging runs forward were key to Rovers title win in 1991-92. Bruckner isn't just one of the best defenders in Rovers' history, but one of the very best ever.

where he had been a towering forward. After an intense on field battle with a young Geoff Giles, Roy was delighted when Peak, a school-teacher relocated to Melchester. Lofty was the rock around which the strong Rovers defence was built. The strongest and best header of a ball around, Peak was also swift, with a good pass and powerful shot. Lofty retired at the end of the 1978-79 season to become coach of the Basran national team. Roy struggled for a replacement showing just how good the big man was.

Alternative - CH Andy MacDonald
MacDonald was captain of the Rovers when Roy Race arrived and had a great influence on our hero. Andy was a real leader of men, he had the complete respect of all his team-mates. That respect was earned on the field as well as off it. MacDonald was a tremendous defender, he read the game like no other. Arguably he was only truly replaced when football tactics moved on and the old centre-half position was redundant. 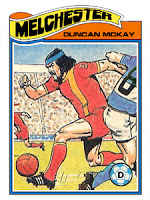 LB - Duncan McKay
The headband wearing Scot joined Rovers from Portdean in September 1975 for a huge £300,000 fee. It was money well spent as Big Dunc was every present in the Rovers back line for well over 15 years. McKay was the complete defender, a ferocious tackler, excellent reader of the game with the feet of a midfielder. Duncan's determination to succeed sometimes led to clashes with Roy and he was rumoured to be close to an exit more than once. However, Roy knew the quality McKay possessed and was unwilling to let him go. McKay eventually dropped out of the Rovers first-team in 1990-91 after a string of niggling injuries including a near career ending back injury.

CM - Terry Spring
The Hitman became the ultimate box-to-box midfielder. Spring had everything, he had a rocket shot, subtlety of pass, a demonic tackle and a locomotive for an engine. His never say die attitude led to him becoming a crowd favourite soon after his debut in 1987-88. Terry was mentored closely by Roy Race and became a role model himself for a wayward Gary Gunn and it was those leadership skills that saw Spring become Rovers captain. Terry took Roy's accident badly and chose to leave the club when at the peak of his powers.

Alternative - Jimmy Slade
The ever-young Jimmy Slade first came to the attention of the Rovers as a feisty midfielder for a Midland League XI when he hurt Andy Croydon with what would prove a career ending injury for the Rovers man. Tony Storme was impressed with Slade's energy and skill and brought him straight into the Rovers team for the 1973-74 season opener. Slade proved undroppable for a decade, playing mostly in central midfield, but also as an attack minded left-back, or capable centre-back. Jimmy made his England debut under Roy against Holland in 1978 and was a regular before the 1982 World Cup, scoring away against Bulgaria. However, as Bobby Robson showed an interest in selecting Jimmy, the impressionable "youngster" went off the rails, injured in a car crash and sent-off twice as he failed to deal with the disappointment of missing out on England. Slade was dropped after his last red card and was another to perish in Basran that summer.

CM - Geoff Giles
The biggest footballing mistake Roy Race ever made was selling Geoff Giles to Melboro' in 1980-81. Believing Giles to be past his best and easily replaceable, Roy let his star midfielder move to Rovers' great rivals. Only Carl Hunt came close to replicating the all round class of Giles. A young Geoff, obsessed with nature and butterflies, was highly sought after and it was quite a coup when Ben Galloway secured his signing in the 1968-69 season. Giles, in spite of his eccentricities was an immediate success. He was fiery and skillful (Giles was sent off three times in his Rovers career), the perfect blend needed for an all action midfielder. For Rovers, Geoff's main strengths lay in his defensive abilities. As a very intelligent man, he was just as intelligent as a footballer. A great man marker, he could always be trusted to diligently sacrifice his attacking instincts if instructed to shut down an opponent. Giles became more attacking in the mid-70s adding a drive to the Rovers midfield, but after the departure of Peak, Roy switched Geoff to the centre of defence. He struggled there, but soon adapted, choosing to back off and tackle rather than challenge taller and stronger forwards in the air. An injury in pre-season, helped Roy make up his mind, but the decision to sell to Melboro' haunted him and drew disgust from the faithful Rovers fans.

Alternative - Jumbo Trudgeon
Lord D'Arcy Plantegenat Trudgeon Marclay was the third name on the team sheet from 1964 to 1975. A multi-millionaire heir and businessman, Jumbo was a versatile forward, left-footed his original role was as a deep inside-left, but as tactics evolved so did Trudgeon. A fine central midfielder in the late-60s, a winger in the 70s and a real "number 10" at times, Jumbo was such a creative player. Also one of the few Rovers to gain an England cap, Jumbo starred as he helped his country to European Championship glory in 1968. Eventually Jumbo decided to focus on his business interests and drop football, but he will be remembered as a man of genuine class on and off the field.

RW - Paco Diaz
Like Karl Bruckner when Rovers signed Paco Diaz from Varagosa at the end of the 1978-79 season, he was one of, if not, the best player in the world. Paco slotted straight into Roy's favourite 4-3-3 formation, as one of his "flank forwards", interchanging from left to right with Vernon Eliot. Diaz was a phenomenal dribbler, possessing speed and strength that sometimes made his runs unstoppable. Paco asked for a transfer back to Spain at the end of the 1982-83 season, but no winger since had come close to challenging Paco as an all time Rovers great.

Alternative - Terry West
Before Terry West, Melchester Rovers had had a string of brilliant right wingers who never stayed long enough to be considered legends; Dupont, Carter, Stokes and Storme. Terry West, too would leave at an inopportune time, but by then he had secured his place as one of Rovers' best ever. His scoring record was phenomenal even outscoring Roy Race in one season. West was a natural finisher rather than a great provider and the youngest captain in the history of the club. Terry soured his reputation somewhat by angrily forcing through a transfer to Eastoke at the start of the 1972-73 season. He ended his career in the mid-80s at Fourth Division Burnside Athletic alongside Johnny Dexter.

Alternative - Rocky Race
Many commentators of the time suggested that Roy Junior would develop to be even better than his father. While those predictions were never fulfilled, Rocky is probably still the best alternative forward to Roy. He was never a true centre-forward, excelling in a deeper role, Rocky was perhaps a more natural player than his dad. He didn't need to put in the hard extra training that other top players did. It was maybe this trait that led to so many on field confrontations and three red cards as opponents riled him with comparisons and suggestions that he had been gifted his place as a professional footballer. Like his father, Rocky left the Rovers, but unlike Roy he could score against them, netting for Melboro' against Roy's own Rovers side. On his return to the club, Rocky became the darling of Mel Park putting in some sensational displays and scoring an array of brilliant goals that his father would have been more than proud of. 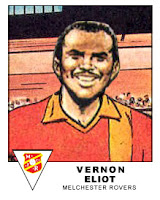 LW - Vernon Eliot
Vernon goes down in history for two special reasons; he was Melchester Rovers' and England's first black player. But Vernon was also the best left-winger Melchester Rovers ever had, by some distance. Faster than lightning, slippery as an eel and as bright as a spark, no-one has matched Eliot for contributions from the left of the Rovers forward line. Eliot first came to the attention of Rovers' supporters when starring for Stanport Rangers in the late 60s. Amazed by his athleticism, Ben Galloway snapped up the forward early in the 1969-70 season. Alongside Race, Vernon was Rovers' most dangerous attacking weapon throughout the 70s. Huge misfortune ended his career in 1982 when he was crushed by a surging crowd at a charity cricket match.

Alternative - Tom Dawson
Dawson deserves a mention simply through longevity. Tom was first pick as Rovers' outside left for nearly 20 years from the early 50s through to 1969-70 when injuries ended his career. Tom's position was only under real threat once and he soon saw off the competition from the maverick Joe Sloper. 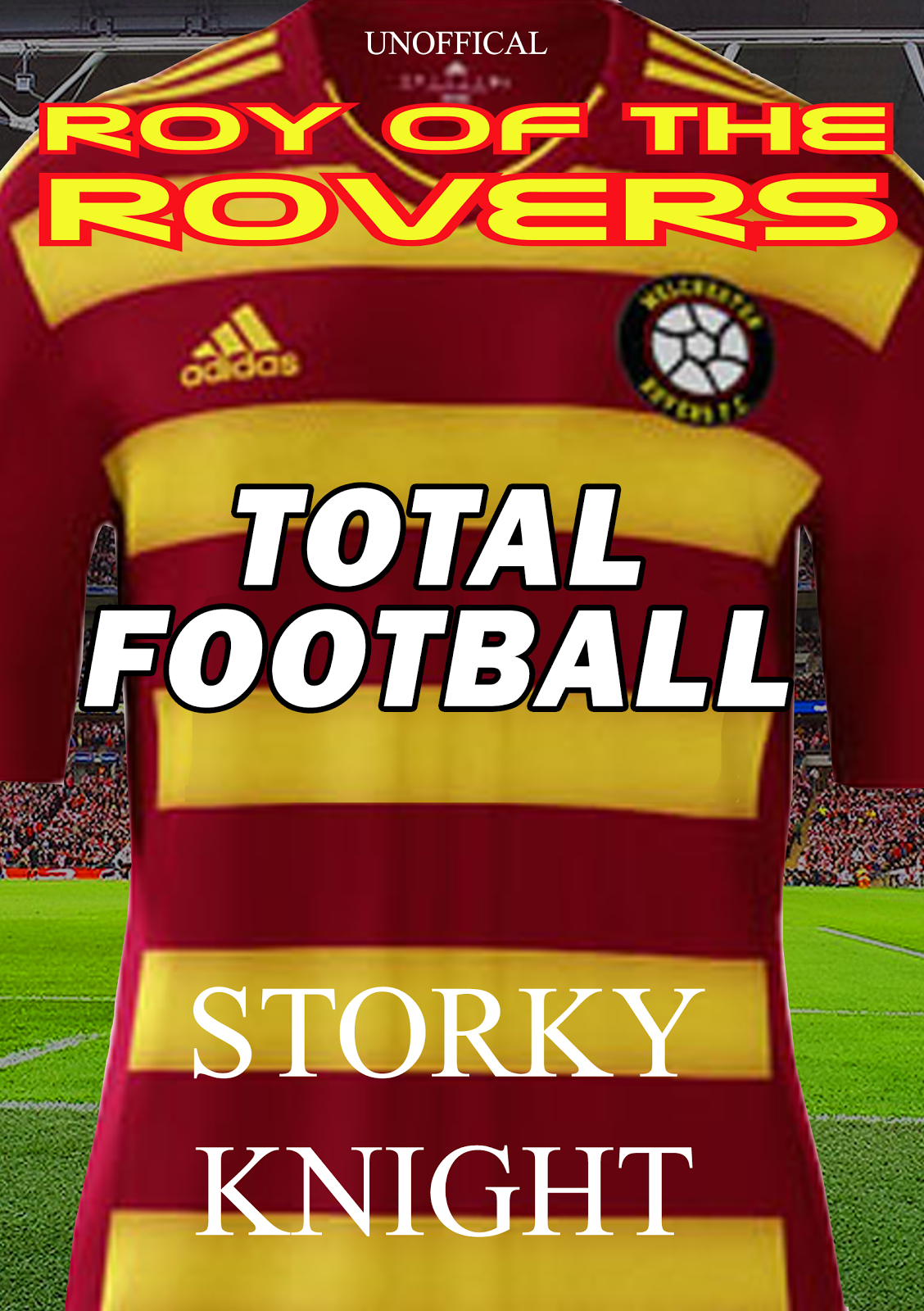